Thanks to Jeremy Clark who helped write up some of this page on Brodie.

Brodie, located on US 7, was one of the leading ski areas in all of New England for many years. Owned by the Kelly family, the ski area boasted world renowed snowmaking and night skiing for much of its early history. Beyond its early snowmaking and night skiing accomplishments, Brodie was particularly well known for its heavy Irish themes - including coloring its snow green each St. Patricks Day.

Beyond alpine skiing, Brodie offered muliple kilometers of cross country ski trails. In the late 1990s, snow tubing was also added. In the off season, Brodie had a popular campground.

At some point in the 1940s, Brodie was a rope tow only operation. It is unclear when this closed.

Jim Kelly started the more well-known Brodie ski area in 1964-65. The initial start up consisted of of an 850' vertical Stadeli double chair (Gramp's Chair) and a small Stadeli T-Bar. A Poma T-Bar was added in 1967, connecting Gramp's Chair to the summit.

As the capital investment at Brodie started to taper off, nearby Jiminy Peak was quickly picking up steam - adding a summit triple chairlift in the early 80s. By the time the mid 1990s rolled around, Brodie was quickly becoming left behind in the region - Berkshire East, Butternut, and Jiminy all had triple and/or quad chairlifts, which Brodie only had a fleet of older, cramped double chairlifts. While other areas were adding new trails, Brodie simply renamed some of their trails in order to boost their count from 33 to 40.

Brian Fairbanks, General Manager and part owner of Jiminy Peak, would often somewhat-jokingly offer to buy Brodie from owner Jim Kelly. In 1999, Kelly stunned Fairbank by taking him up on his offer. By the time the 1999-2000 season started, Brodie was the sister ski area of Jiminy Peak.

There was a lot of work to be done. The new owners quickly started to put together expansion and improvement plans, focusing initially on snowmaking. A few SMI fan guns were purchased and a new upper mountain snowmaking pond was constructed. Despite this, the owners were unable to attract the amount of skiers necessary to justify the operation. Faced with sizable maintenance needed on the aging facilities, they tried one last effort to keep the mountain going - by announcing the installation of a new high-speed detachable chairlift if 3,000 season passes were sold.

Sales numbers were not met and the ownership decided to close up shop in 2002. Skiers were encouraged to go to Jiminy Peak.

On June 12, 2002 the following press release was issued (thanks to Bruce Delany for sending it in).

Later on in 2002, this was posted on Skibrodie.com:

The tubing operation continued at Brodie while a new ownership group was brought in. A magic carpet lift was added for tubing.

March 25, 2007 was the last day of tubing. Jiminy Peak is no longer connected to the tubing operation, which was dismantled in 2007. Gramp's Chair has been dismantled. The Brodie sign on Route 7 now reads "Snowy Owl." It is unknown if there will ever again be lift-served skiing at Brodie. According to Glenn Maloney, Andy's chair may remain, in case the new owners wish to offer skiing.

Today, many skiers who enjoyed Brodie still wish they were open - and perhaps someday Snowy Owl can bring the area back, at least in some form. Like with most areas, there is a lot of passion with the closing of this area, but we have tried to show all sides with this article.

For myself (Jeremy Davis), I skied here in January of 01, on a Jiminy/Brodie combo ticket. Despite a lot of natural snow, not much of the mountain was open. The lifts seemed to be running slow. Still, I enjoy the area.

The main mountain was served by three chairlifts, though only one went to the summit area. A shorter double chairlift as well as a pair of rope tows served novice terrain at the base. The advertised vertical drop was 1,250 feet, making it one of the largest New England ski areas ever to close. The below trail map in 1968 shows the layout of the mountain, with 2 chairs, 2 T-bars, 3 rope tows, and plenty of night skiing - and in fact, was the largest night skiing area at that time! 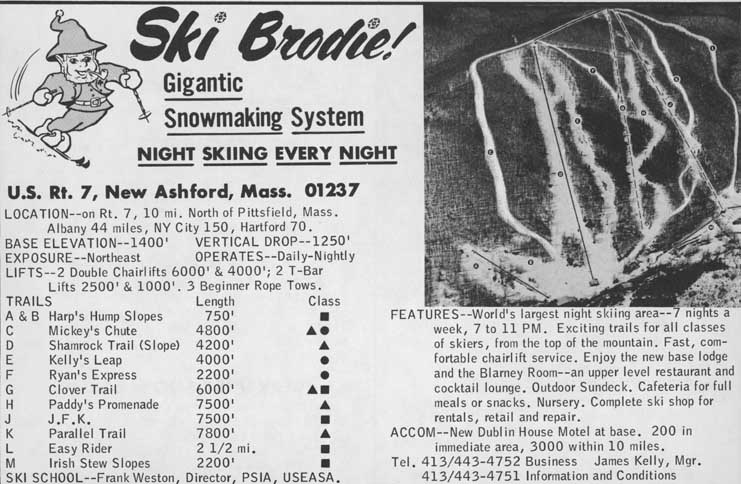 Kristian Omland (2001): Actually, I think I can add another area to your list right away. Williams College (where I went to school) had a ski area at Berlin Mountain, a few miles south of Petersburg Pass. It is probably in the town of Williamstown, but I'm not positive about that. There was a racing trail that was a classic narrow winding trail above and a wide slalom slope below. A tow pulled skiers as high as the top of the slalom hill; there was also a ski jump. I don't know when it opened, but it was abandoned ca. 1970. The tow was moved to Brodie Mountain, where we (i.e., the ski team) still used it as our private training lift in 1991 -- I think now they train exclusively at Jiminy Peak.

The year before I entered high school all my ski buddies (with the exception of you, Andy!) bought snowboards and switched to the "dark" side. I saw how much fun they were having so the next season (1994-1995) I got one myself and started lessons with DJ Seagraves and my friends. I was frustrated because I couldn't get the hang of it right off the bat and my father stepped in and during one particularly painful ride down Patty's Promenade, he taught me and I figured it out. The next weekend, DJ had all of us jumping off a school bus that was positioned between Harp's Hump and Irish Stew (see bus photo). We continued our lessons for the rest of the season just having fun riding with DJ and our new Massachusetts friends. The next season we ditched the lessons but still all rode together and did all the crazy things that pubescent teenagers do. What a time to grow up! After those two seasons of snowboarding, my next goal was to become an instructor at the mountain. In the season of 1996, that goal came to fruition.

I had an absolute blast as a snowboard instructor. My buddy Andy signed on as a ski instructor and we got free season passes as a result and worked insane hours at the mountain to feed our passion. Teaching others came natural to us and we soon worked our way up the pay ladder. The season of 1997-1998, Andy and I got certified through PSIA and gained some respect through our peers. By this time we had made a ton of friends and called Brodie "home" due to the fact that we spent every free minute there.  At the end of the 99-00 season is when I heard Brodie was being sold to Jiminy Peak and that they would merge. I knew that Jiminy would shut down Brodie operations within the next five years. It was a feeling I had inside. I returned in the 00-01 season to a new boss and new rules. Brodie didn't seem as family oriented as it used to be and it became quite stuffy. The casual atmosphere we once knew seemed to be lingering and turnout was at a low. Brian Fairbank promised us nothing was wrong but when I had to board a bus to go to Jiminy Peak one day to listen about the new management and take an employment test, I knew trouble was brewing. Constant clashes between my new boss and problems with my employees led me to sell my coat and walk away from Brodie. They didn't need 5 years to shut down, as the area closed in 2"
The Blarney room is still the coolest bar/restaurant I have ever been to. We used to go up there and watch all the beginners from NYC go flying down Harp's. You got a great view from the huge windows and one day a few people who had (presumably) never seen skis before went down the mountain and hit the ski racks at the bottom at full speed. Skis flew everywhere and fortunately they were ok.

Special Thanks (please include): John Koch, DJ Seagraves, Fran, Tom Miller, Andy, The Kelly's, Mike Dimin and of course my parents, who carted me back and forth.

Brodie was a mountain I (and I’m sure many others) was terribly sad to see close. It was purchased a few years back by the owner of Jiminy Peak. However, from what I've heard, trying to get improvements through uncooperative town land use boards and the skyrocketing coast of what would need to be some pretty extensive lift and lodging renovations have eliminated any hope for reviving this gem of a ski area.

Brodie was a well know and loved family ski area in the Berkshires. With their famous long cruising runs, big lodge, St. Patty’s day celebrations and puddle jump, etc. It was really THE place to ski when I was a kid.

Brodie was one of my favorite ski areas. My friends and I went there quite often, since it was a little cheaper and less crowded than Jiminy, Hunter, Windham.
It was a fun spot, especially on St. Paddy's Day, when they painted the snow green (with food color I guess). I remember hearing rumblings back then that Jiminy Peak was going to buy out Brodie. We were horrified, because we didn't like the 'attitudes' at Jiminy, and knew their intent was to close down the competion. Shame on them for closing a great location!

Jenn Manley (Early March, 2007): My name is Jenn Manley and I've been skiing since I was 2 years old.  I grew up skiing at Brodie Mountain, which, as you know, has since been purchased by Jiminy Peak and closed down.  Brodie was a great mountain to learn to ski, and I have many fond memories of it...especially the big St. Patrick's Day celebrations they used to have.  Being young and watching tons of people ski down in the torch light parade was always so exciting, and I loved how they dyed the snow green in places to celebrate the holiday.  A couple years before it was shut down, I had started skiing at Jiminy Peak, which is now the mountain I ski at the most, but I was still sad to see the mountain where I grew up close for good.  Brodie is now renamed Snowy Owl, and they have snow tubing on one of the beginners trails.

Brodie Mountain is done!!!  The property was sold to SilverLeaf.. a Southern time share developer.  They have plans to build 250+ time share units on the Brodie [Snowy Owl] property.  The spec unit was started 2 years ago and never finished.  The lifts started coming down last summer.. and may all be gone by this summer.  I am not sure if one chair [Andy's chair] will remain.  They have stated they wish to operate skiing and tubing for their guests.  The purchase agreement prohibits public skiing there ever again. [private club is ok].
Sounds like the lodge and famous Blarney room will be torn down.  There will be no signs left of the former Kelly's Irish Alps.

Do you have any memories of Brodie? If so, please contact us!

If you have more information on this area, please let us know.