Our earliest reference to the ski area is the 1962 Eastern Ski Map, which states that Mt. Tom had a double chair, T-bar, rope tow, 3 slopes, and 1 trail, along with snowmaking. The next year brought another rope tow, trail, and slope.

Mt. Tom in 1968. Two double chairs are shown, along with a rope tow and T-bar. The old double was one of the center pole variety. By 1969, the mountain had added another double chair, T-Bar, J-Bar, 2 slopes, and one more trail. In 1973, four more trails were cutting, boosting stats up to 6 slopes and 7 trails. Another chairlift was added before 1980, and when 1987 rolled around, there were 17 trails. A few years after, a T-Bar was replaced with another double chair.

One of Mt. Tom's double chairs, mid 1990's By the time the mountain closed, all of the T-Bars were gone, as the mountain was serviced by 4 double chairs and a J-Bar. Also, there was night skiing and snowmaking on all 15 of the trails at the time of the closing.

John Johnson: "I just want to drop a line thanking you for your web site.  Although I am not surprised by the closing of Mt. Tom, I am disappointed to just find out about it from your web site.  I skied this area from the time I was 10 until I was a junior in high school (1983).  Looking over the trail map brought back a lot of memories as well as testing my memory for naming the trails.

I had many good times there and learned to become an excellent skier. It was a great place for a kid in winter.  I am sorry for the communities around the area because their children will not conveniently have the experiences and joy I had
gotten from the ski area."

Sean O'Malley: I spent my formative skiing years on Mt. Tom and have many fond memories of the area.  My father, Bob O'Malley, worked hard to convince Dan O'Connell that his quarry had great potential as a ski hill.  Dan ultimately developed the area and expanded it over the years.  In later years, Dan Jr. directed the operation.  Cal Coniff, who directed the NSAA for many years, was (I believe) the first general manager.  Cal was an elegant skier and a fine manager (and he pulled my ticket on number of occasions for jumping or skiing out of bounds).  Mt. Tom was a great "babysitter" for many of the youth in the Holyoke-South Hadley area.  Growing up on Mt. Tom helped me to develop an appreciation for skiing and the outdoors that continues to influence me today.  And I know my life is far richer (and I am sure far different) due to the many hours I spent under the lights running gates and dodging snow guns. 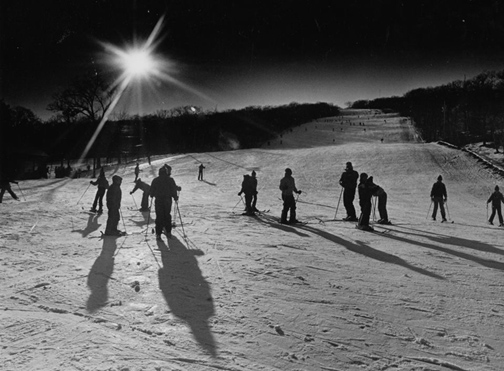 Thanks to Matt Cavallo who sent in these recent photos from 2013 regarding Mt. Tom. Click on each for a larger version. As you can see, the lodge is in rather rough shape.